VIEW LISTINGS ON THE GO!

'Passive House' is an international standard for energy efficient buildings where a house (or any other type of building) is so well insulated and air tight that it can function without a primary heating system.

Like LEED, BuiltGreen (or other rating systems) there are Passive House organizations, such as IPHA, CanPHI, or PHIUS, which can certify buildings - though many projects are built to the standard without going through certification.

In contrast with these other rating systems, the PH rating focuses on comfort and energy consumption only (vs. LEED which looks at a wider range of green building issues) but PH goes well beyond LEED in this area - usually resulting in projects that use 90% less energy than a typical building.

One of the key criteria for achieving the passive house standard is having an airtightness rating less than 0.6 ACH (air changes per hour... i.e. 0.6x the volume of the house). The airtightness is assessed using a blower door apparatus.

The energy efficiency targets were very specifically formulated such that the building sits in the 'sweet spot' which balances construction costs vs. performance.  By hitting the energy targets a Passive House can eliminate most of the cost of a conventional heating system (thereby offsetting much of the cost of upgrading insulation and windows).

The Lanefab PH wall assembly for renovations is ~16.5" thick and R48.

It is a double wall assembly, with an outer framed wall filled with dense packed cellulose insulation, and an inner wall (to hold the plumbing and electrical) which has batt insulation.

For new construction we're using a combination of prefab structural insulated panels (SIPs) and Roxul mineral fibre insulation.  The walls are R48, and the roof is R74.

At Home in the Out-Back 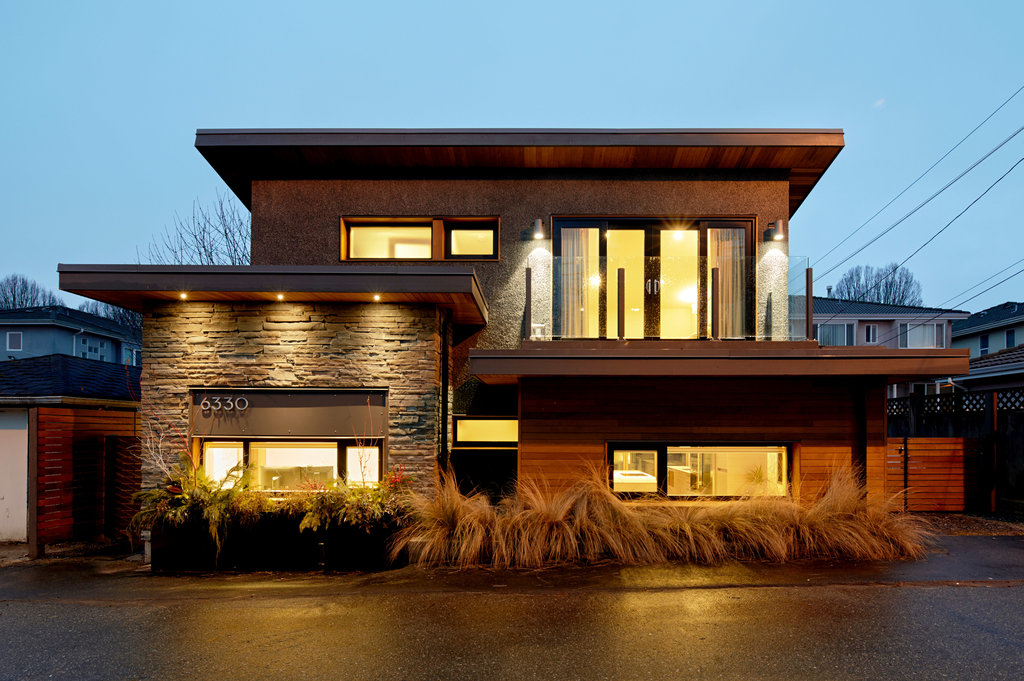 Little House on the Alley

For more than a year, Petto Chan refused to consider his wife’s idea of building a small, sustainable house in the backyard behind the large Vancouver home where he grew up with his extended family.

He simply couldn’t get over the stigma of living among the garbage cans and garages that lined the service alley out back (or the laneway, as it known in this city, which has an extensive network of them). He kept envisioning having rats as his neighbors.

Mr. Chan, an analyst for Canada’s largest telephone company, who is now 41, also wasn’t thrilled about staying so close to his parents and grandmother as he began to raise his own family. It was bad enough that he and his wife, Billie, had been living in his family’s basement for more than a decade. “Once we had Maddy,” he said of their daughter, now 6, “that wasn’t going to cut it anymore.”

So, starting in about 2011, they spent every weekend for more than a year trudging around with their daughter, looking for a place they liked and could afford on a budget of less than $800,000.

As they soon discovered, it was an impossible challenge — partly because he’s stubborn and she’s picky, but also because Vancouver had been outed as a beautiful, livable city.

They wanted a place that was preferably modern, close enough to their work so they could get by with one car and small enough that they wouldn’t spend all their time and money maintaining it. Mr. Chan, who works primarily at home, needed an office; Ms. Chan, a high school baking instructor who loves to bake for family and friends, wanted an expansive kitchen.

In all, they saw more than 100 places — and way too much slapdash construction, said Ms. Chan, 42. Nothing satisfied their conditions or fit their budget, which they knew would be a stretch on their incomes.

Eventually the search wore Mr. Chan down. “I finally realized,” he said, “there wasn’t a place that was going to suit us.”

There were huge advantages, it turned out, to building new, in his family’s backyard. And not just because his mother continues to cook for everyone on weeknights.

Their two-bedroom, 1,050-square-foot laneway house is sleek and energy-efficient, and designed to meet their exact needs. And it was more affordable than they expected.

Because they didn’t have to buy the land, the total cost of the project was well below their budget: less than $500,000. So they can save for Maddy’s college tuition and they have more disposable income.

“Carrying a large mortgage is not fun,” Ms. Chan said. “We watch our friends. It’s hard on a person’s life.”

To get what she calls “a full-sized feel to the house,” they opted for fewer, larger spaces, she said, “instead of squeezing in lots of rooms.” They sacrificed a dining room, for example, so they could have a bigger kitchen.

Now, Mr. Chan said, “We eat at the island, all three sitting in a row.”

The house, which was designed and built by the Vancouver firm Lanefab, is highly insulated, with walls 13 inches thick, and a solar array on the roof, so there are months when it is virtually net-zero in terms of energy consumption. At most, energy costs run a little over $80 a month in the winter.

None of this would have been possible, though, if city leaders hadn’t been bold enough to approve laneway houses in 2009, said Bryn Davidson, a founder of Lanefab. “They adopted it citywide, and you didn’t have to get neighbors’ approval,” he said. “As a result, a whole new building industry was created at a time when most of North America’s was collapsing on itself.”

Early on, Mr. Chan said his parents were a little skeptical about the idea. “As older Asians,” he said, “they had reservations about everything.”